I think this would be cool for akkoma for quote replies / quote renotes to be an option. People say they don’t want this to prevent harassment, but fedi already has harassment, and the harassment instances already have this feature in Soapbox lol (proving pleroma can do it)

I would only ask that it’d differ from Misskey in that it possibly mentions the user you’re quoting? if possible. And maybe let instance admins turn the feature off if they don’t want it for their site and then everyone is happy

I want this because:

I think Pleroma not having this makes pleroma feel outdated honestly, especially as I use both the birdsite and fedi. It adds a new way to conversate and engage with posts and your followers that is just necessary honestly.

but as far as i see it the “harassment” angle doesn’t hold too much water since a quote is just… well it’s a fancy link isn’t it?

I think it’s worth looking into supporting what misskey has, as well, since I think it’s a bit different than soapbox, and compatibility between software would be nice

does soapbox notify the original poster? misskey does (or at least, it’s supposed to, but it only works on other misskey users), and I think that’s the best course of action. if we could make misskey quotes render and notify on akkoma that’d be awesome

implemented and merged into develop 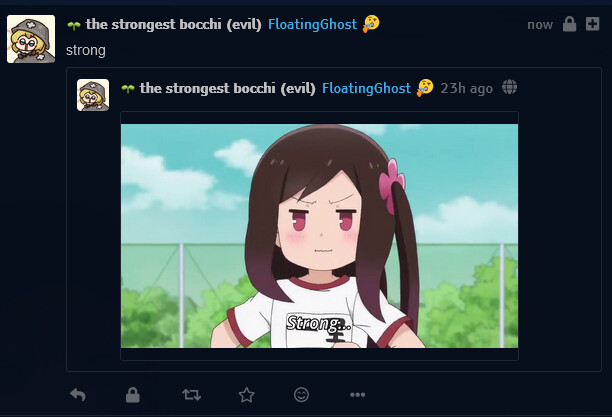 quotes are allowed for public/unlisted posts only, but otherwise operate sorta like fancy url previews