Another month, another release - this time with more fun stuff.

I’ll start off by saying henlo to all the new people around here! I hope your migration from the other place is going well and that you’re figuring out the esoteric cuture of fedi. You’ll figure it out eventually.

Oh, and we’ve got a new landing site now! https://akkoma.social - that should be an easy introduction to any newbies debating migrating or whatnot.

At long last, moderation actions are available in pleroma-fe! You no longer have to go into admin-fe to see your reports and act on them. It’s a first pass, but it works!

Hooray for not having to keep two tabs open at all times if you’re an admin. 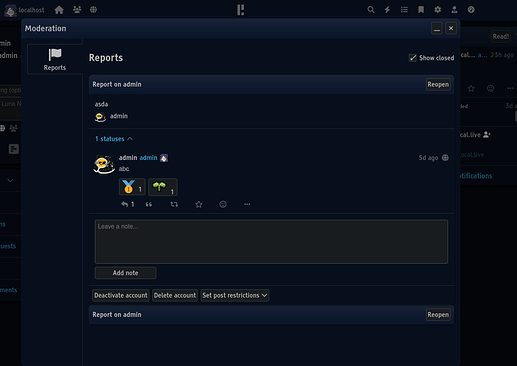 Ever sat there wondering if the user who sent a post was using pleroma or akkoma? Can you send them emoji reacts? Wonder no longer! Now the software the instance is running will be available via the alt text of the favicon. There’s a bunch more info in the actual API, but this is our first implementation of it.

Small one, this. When a user has requested to follow you, and their request is sitting in your inbox, their profile will reflect this. Now you don’t need to wonder “did so-and-so send me a request?”, since it’ll… just tell you!

This one speaks for itself! You don’t need to remember all the MFM tags anymore, it’ll be autocompleted for you whenever you type $[, like it would for emoji 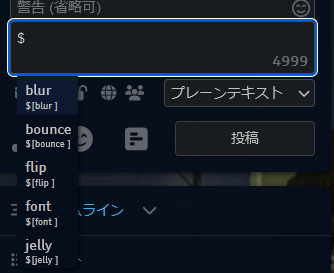 This was technically in a hotfix for last stable, but this is the first proper release with it in.

Timeline and notification queries are now between 30% and 50% faster. Gotta go SPEEDY.

Third party containers are a thing of the past, now we have a proper way to deploy in docker

It’ll act as a pretty thin wrapper around akkoma’s dependencies, so it’ll be like you’re running from source, but without having to keep an elixir/erlang environment locally.

The last month, for obvious reasons, has been one of massive user influx. Whereas before akkoma was used only by a handful of instances I knew the admins of personally, we’re now seeing about 170 akkoma instances - which is great, but I won’t say it’s not a little scary.

Whilst those that contribute to akkoma try their best, with this level of influx it may not always be possible for us to get back to you immediately, sorry about that!

I guess that’s as good a segue as ever into

This month, the biggest, most influxiest thankies go out to:

sfr@snowdin.town - The entire admin panel was their work! Pretty impressive honestly
ilja@ilja.space for the help stablilising tests! Help on the backend is super appreciated
solidsanek@outerheaven.club for the MFM autocomplete!
sn0w@cofe.rocks, @xarvos@outerheaven.club, @eloy@hsnl.social, tcit, norm, nullobsi for various fixes all over the place, thanks for spotting them!

perhaps worth mentioning here, to any instances that might censor their SimplePolicy blocks through the backend:
domains are no longer regexes
ex**ple.com => example.com does not work, and you will be opening yourself up to blocked instances
*.example.com is a special case that is preserved for backwards compatibility but be aware

or, everything is a wildcard

Nice update, thanks a lot. I will try to install it today.

edit:
@FloatingGhost Update succeeded, but the favicon with version alt text seems only to be displayed on posts from my own instance. Do i need to activate some special setting for this?

it should be on by default, but check that akkoma/config.exs at develop - akkoma - Akkoma Development is enabled

Thanks for the hint.
It was disabled, i enabled it, but the favicons are still missing.

edit:
I stand corrected: i get favicons for some instances. So maybe more will show up with time?

yep correct - we’ll fetch them when they send us activities, so it’ll slowly populate over time

Starting to familiarize myself with Akkoma, so excuse a potentially dump question.
How does the 2022.11 release fit with the backend version shown in the UI? Am I running 2022.11?

Talking upgrades, the documention shows how to upgrade the backend: Installing in Docker - Akkoma Documentation
How would I go about upgrades to the frontends? Treat it like a new install?

backend is fine though, only frontend needs updating

yeah sadly elixir doesn’t let us use custom versions, so we have to use semver

and yes, a reinstall of a FE is how you update