wahaha! now nobody can escape your all-seeing gaze

another month, another release - this time with a few really nice user-facing features, as well as some fixes.

not much fluff to throw at you this month, so let’s just get right to it, shall we?

follow a lot of accounts that post in various languages that you don’t speak? or just browsing your bubble timeline and want to understand what is going on over in weird german name instance? now you can!

simply set up either DeepL or LibreTranslate in your instance config (under instance in admin-fe) and you’ll get a brand-new “translate” option on your dropdown - the language this tries to translate to can be configured in your settings, but it’ll default to your locale. 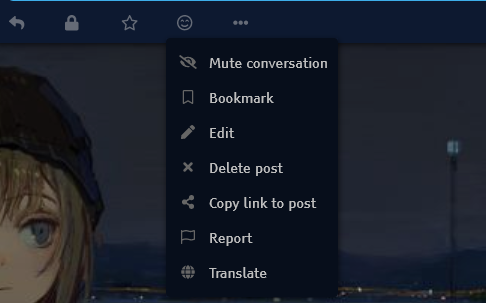 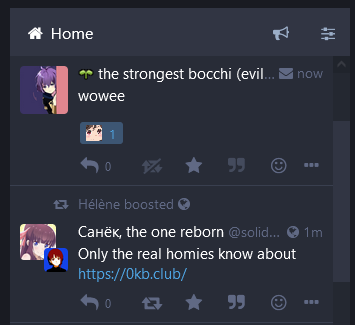 Akkoma already supports the mastodon frontend, which uses glitch-soc’s fork - but this lacks some of the features we might want to use. Luckily, fedibird is here to fill in some of the gaps!

support isn’t quite complete yet, but it offers quite a rich featureset, including custom emoji reactions (which is realistically why you’d want to use it)

To use it, all you need to do is install the fedibird-fe frontend pack, then point your :mastodon entry to fedibird-fe! See the docs for more info

Ever made a typo on a super long post and died of embarrassment? Well no longer!

All posts now support editing, which allows you to update the text content of the post. This is supported by mastodon, and by pleroma develop, but support is a bit spotty right now. At least we have it, eh?

An edit log is maintained for all posts, so you can always see how a post has changed over time.

Navigation has gotten a total rework! Now it should be miles more flexible, and convenient for you lot

First up, the top bar navigation! This places a load of the navigation shortcuts previously only available on the sidebar up on the top bar - you can seemlessly switch from your home timeline, to interactions, to your bubble timeline, all without a single dropdown~

This can be switched on or off by default by your instance admin, or modified per-user in advanced settings

Secondly, an alternate implementation, where the timeline dropdown on the timeline panel is replaced by a set of tabs. This one should be pretty self-explanatory I’d think, less dropdown, more clicky clicky. Once again, this can be turned on or off by default on a per-instance and per-user basis.

User profiles now have seperate tabs for “Posts” and “Posts with Replies”, which should allow easier skimming of someone’s profile. Which tab you open by default is configurable in the settings!

This also has the added benefit of being much lighter on servers, since we don’t have to fetch all tabs at once anymore (why did it do that anyhow?)

This was actually a bug in previous releases, but people liked it so much that it is now a feature!

The gun HTTP adapter has been removed as of 2022.09, and finch is now standard across akkoma. If you have set Tesla.Adapter anywhere in your config, please remove the config line before upgrading, or make match the default config

This month, thankies go out to:

tusooa@kazv.moe from whomst i have cherry-picked quite a few fixes this month, as well as the editing feature
eris@akko.disqordia.space for the navigator reloaded’s top bar stuff
mergan@pleroma.viridianpatriots.com for the posts/replies split, as well as fixing a bunch of weird scroll behaviour
norm@biribiri.dev and kawen@ak.kawen.space for spotting things that need upating in docs/install files