kernel, i’m trying to sneak around, but im dummy thicc and the clap of my database keeps alerting the guards

it’s been an entire month since the first stable release of akkoma, and we seem… actually to still exist!
appropriately magical. we’ve also got a good little set of instances using akkoma, thanks everyone!

well enough preamble, let’s let into it, what have we got this time around?

ever typed “ref: <link>” in your post and wondered why you had to do that? or had misskey posts come through with zero context? well no longer! you can now “quote” posts with the little " icon. this acts as sort of a fancy link, it does not generate notifications.

you can quote all public and unlisted posts that you’re able to see. 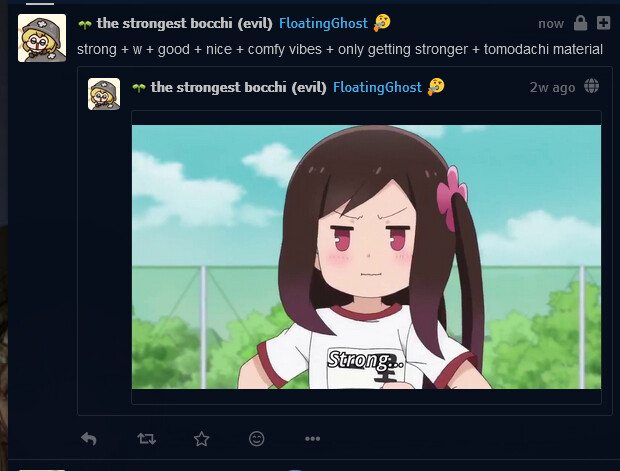 so we’ve got the local timeline, yeah? the only one above this is “the whole known network”, which is a massive firehose of posts which can be very scary for newbies on the network. thus, the bubble timeline exists. this represents your “local area” of the fediverse, and consists of any number of instances picked by the instance administrator(s).

this should help new people ease into federation without having to dive instantly into everything being spewed out onto the network.

emoji packs have been a thing for ages, but nobody ever really used them for anything except management. now emoji are seperated into packs to pick from, which should make loading them on instances with millions (looking at you, weird german name instance) much less of a pain! also stickers are here too! 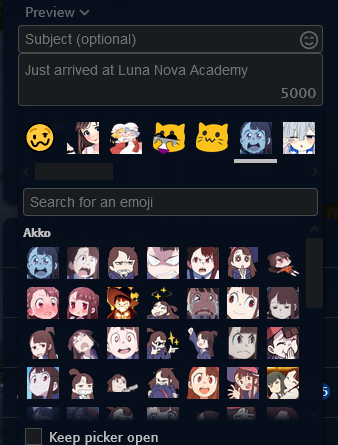 did you know the server can handle custom modules inserted at runtime? no? that’s because it was very underutilised. now you can put directories containing submodules in your modules directory and have them load at boot.

pleroma-fe was only really ever developed for english and never got much coverage in any other language - that has now changed!

and localisation bugs introduced by pleroma have been fixed. grand duke 前前 is no more (may he rest in peace).

did you know pleroma had scrobbling support? no you didn’t, because nobody used it, ever.

you know it used to take like 30 seconds to boot an instance? well that was because of prometheus_erl taking an age. that’s been purged and you can now reboot in 5 seconds or less!

a few bits and pieces here, first off thread breakiness. in the past, threads created by misskey could break due to a bug in pleroma itself. thanks to helene this is now gone!

also, follows have been fixed. if you were in a state where your misskey follows were never coming through to your akkoma instance, you should now be able to unfollow and refollow to rectify this.

There is one optional step which can be run once your instance is back up. This is destructive, and is not currently required, but may be in the future. It can be a rather long migration, so I do recommend running it in the background once you’ve installed everything else and rebooted

this will remove lots of garbage records from your database - which can make up 30-70% of your objects table. kudos to helene for spotting this.

this month thankies go out to:

if i forgot to name you please bulli me and i will add :{{

a boring note on politics

over the past month a lot of people have been spoiling for a fight, and to my own discredit they have gotten a handful. i think we’re gonna have to be mindful going forward that this will happen, the project got more attention than i expected and it is set up as an ideological opposite to other parts of the network. so basically, just don’t give them the fight. if you see me being baited as well, feel free to virtually slap me.

to that end, we now have a code of conduct that contributors will be expected to abide by from now on.

Ubuntu 22 is now LTS, and the glibc is not compatible with 20 or before

the window for the condition to occur is quite slim, but it can occur, especially when running on lower-spec hardware

if you have federation issues with specific users on *roma instances where their messages don’t reach you, you can run